The Knaften property, originally staked for its gold potential, was upgraded with two base metal target discoveries in 2017 and 2018. The Rodingtrask VMS Zn-Cu and a separate Cu-Ni target add significant exploration up-side to the previously gold-only Knaften project (Knaften 300 Gold Zone), and now the Company has numerous opportunities at deposit discovery by way of multiple targets and metals. All three targets on Knaften are wide-open for expansion and further discovery.

The property covers 39.1 sq. km at the south end of a highly under-explored and prospective area ("Gold Line”) or Knaften-Barsele Arc in the Vasterbotten District of northern Sweden. The region hosts more than 12 million ounces of gold delineated in existing and mined resources plus several producing and past-producing VMS base metal mines. 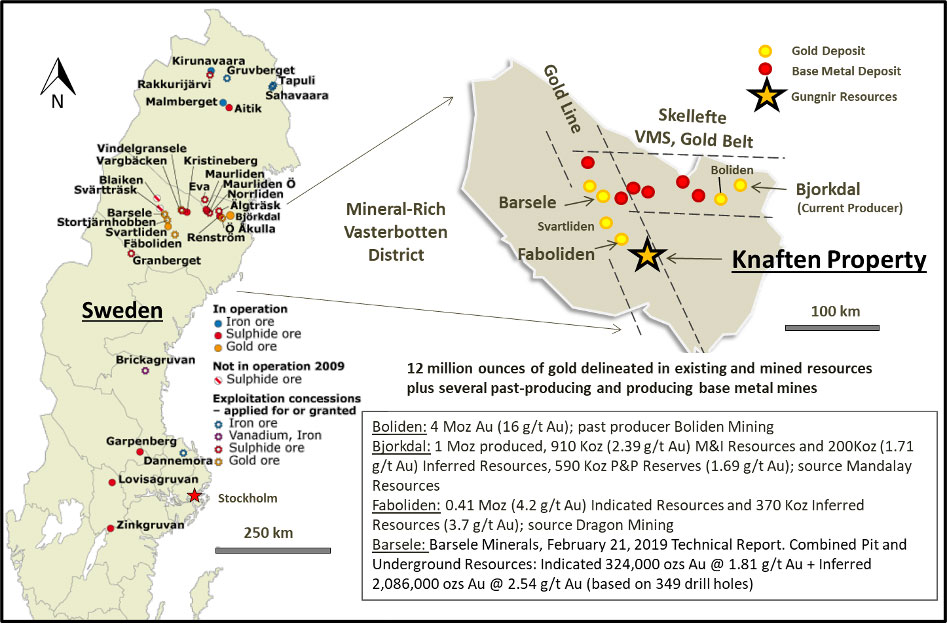 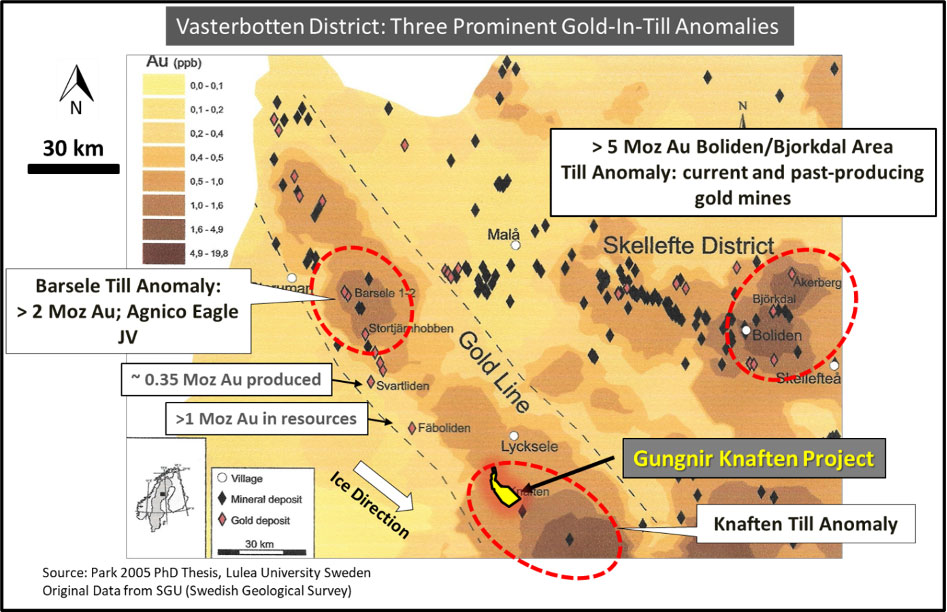 Knaften covers Au in boulders and outcrop, as well as drill-indicated Au mineralization (Knaften 300 Gold Zone; 50+ drill holes), along a developing 10+ km long geochemical-magnetics trend along the western contact of a granitic intrusion that core the Knaften greenstone belt. The main source of the large Au-in-till anomaly (one of the largest in Sweden) to the southeast is believed to be located within the Knaften belt. Other gold-in-till anomalies in the Vasterbotten District cover either current and past-producing gold mines or known gold resources. 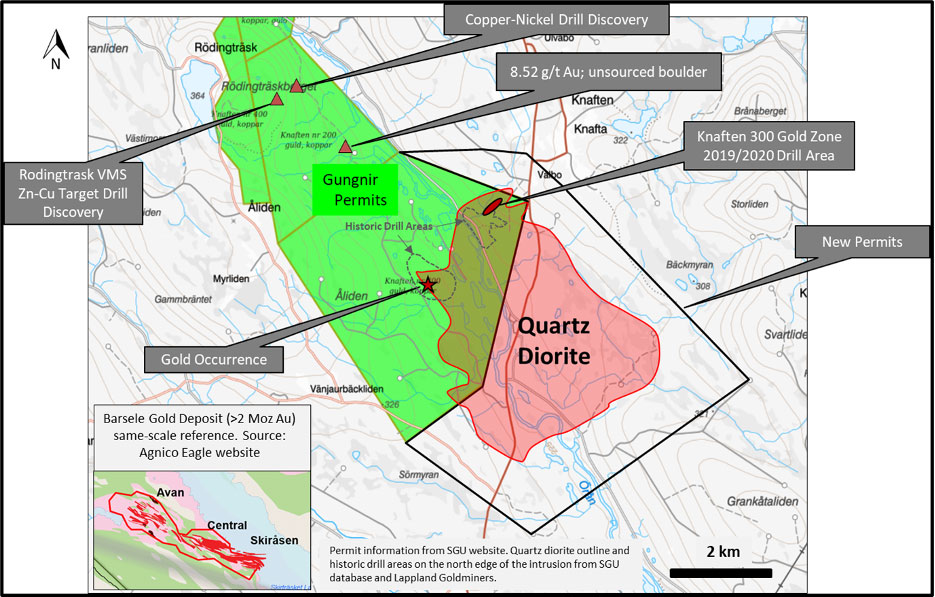 Gold mineralization at Knaften is a regarded as a prospective intrusion-related gold target with gold mineralization occurring both in the intrusive and adjacent sedimentary and volcanic rocks as disseminated replacement style mineralization (Gungnir’s 2014 discovery area, up to 8.52 g/t Au), stock works and veins. Intrusion-related gold systems are an economically important class of gold deposits which are attractive targets as their size can be very large with open pit grades to high-grade gold. With this model and the fact that the property covers up-ice of a very large glacial gold in till anomaly, which has yet to be fully sourced, makes Knaften that much more of an attractive target.

Prior work consisted of drilling carried out over several phases from 1995 to 2008 by Swedish exploration groups including North Atlantic Nickel (NAN) and most recently Lappland Goldminers. Drilling was concentrated mainly in two areas approximately 3 km southeast of Gungnir’s new gold prospect area which the Company discovered in 2014. As described by Lappland Goldminers, gold mineralization is found as sparse, visible gold grains hosted in a quartz diorite intrusion with breccias and weak arsenopyrite disseminations, quartz veining with carbonate and sericite alteration. A total of approximately 8,400 metres was drilled in 58 holes, mostly in one area now referred to as the Knaften 300 Gold Zone. Highlights include:

True widths of the drill hole intersections reported in the "highlights" above cannot be determined from the information available.

A new VMS target discovery outside traditional Skellefte belt in northern Sweden with similar age to older VMS deposits in Finland. 2018 drilling encountered widespread metal-enrichment (Zn, Cu, Ag) in core lengths > 100 metres in host conglomerate (see NR’s Aug/Oct/Nov 2018). Only 4 holes have tested this target, all into the edges or halo of a large hydrothermal VMS system. So far mineralization, alteration and marker horizon defined over a strike length of 200 metres. Known mineralization is centred on a magnetic high anomaly; several similar magnetic highs clustered on >10 km trend. The current working model is a mafic volcanic-sedimentary VMS setting. The goal now is to locate the core of it targeting higher grade massive sulphide mineralization. 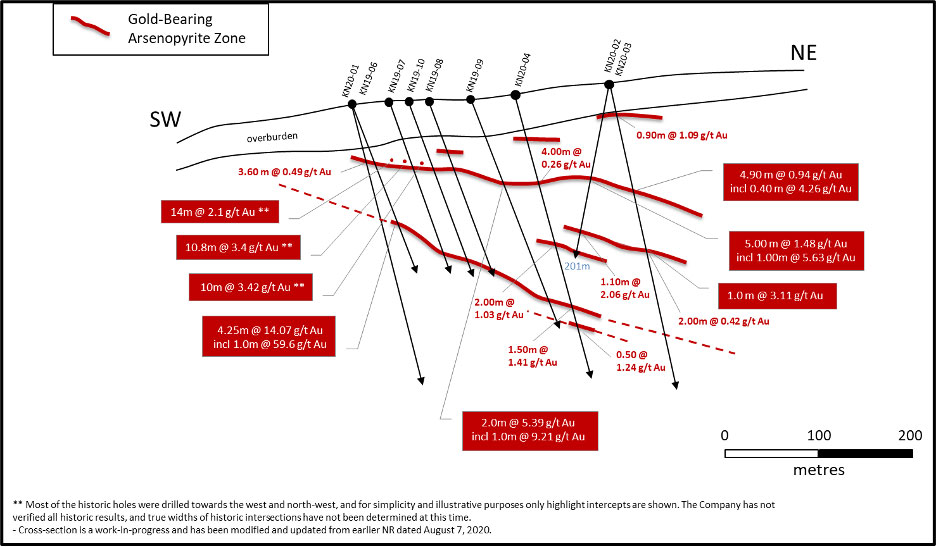 New discovery by Gungnir in 2017, with a second hole drilled near-by in 2018 cutting magmatic sulphides assaying 0.38% CuEq over a core length of 14.4m (see NR dated Oct 4, 2018). Near-surface intersections are located 400 metres east of the Rodingtrask target. Mineralization consists of disseminated, blebby, patchy and erratically banded pyrrhotite with lesser chalcopyrite. Host rock is gabbro including vari-and orbicular textures which are documented textural styles closely associated with potential massive sulphide accumulations. Blue sky potential on this target as well with only 2 holes into the mineralized system.